A Look at Job Market Dynamics

“Double dip”, “More than 7 million jobs lost” and “Over five job seekers for every job” are startling facts that are both easy to understand and easy to report. Unfortunately, they tell only a part of the jobs story and they can leave job seekers feeling hopeless, de-motivated and like there are literally “no jobs out there.” For the individuals and families directly affected, these are difficult times – financially, socially and emotionally.

But as one recessionary president put it: “. . . the only thing we have to fear is fear itself . . . which paralyzes needed efforts to convert retreat into advance.” FDR understood that reasoned confidence and hope are critical. Fortunately, labor market data tell a more hopeful story and suggest that finding a job, while difficult, is not impossible when we consider: 1) total jobs and 2) total hires.

Another way to understand US job loss is that, from the peak to trough, the US has lost less than 5% of its jobs in this recession. In fear, we write little about the million jobs we’ve regained in the past two years. We often forget the significance of the 95% of jobs that remain in our economy. And worst of all, we often ignore the most significant statistic for job seekers – hiring. 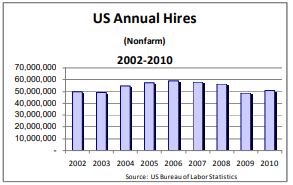 In each year of the recession, US employers made 50 million hires or more in an economy of about 130 million jobs. An average city of 100,000 people would have had a workforce of 43,000 and 16,000 hires per year. How can we be hiring millions and losing jobs at the same time? The answer is that hiring is driven by more than the total number of jobs. It is also driven by “churn” – the natural number of business startups and failures as well as employee quits, relocations, deaths, terminations and retirements. Each creates the opportunity for a hire. And if you’re hoping to be hired, the number of hires can be more important than the number of jobs.

Opportunities in each job market will vary and not all job seekers can match all job openings, but fortunately for job seekers, employers do keep hiring, even in a downturn. In April of 2011, employers had 2.97 million open jobs, while many of our unemployed were feeling that there were no jobs available. What if we could speed up the hiring connections between job seeker and employer, cut hiring time in half and, in doing so, cause 1.5 million more people be employed. What would that do for: 1) production in the economy; 2) job seeker savings and 3) state budgets supporting those job seekers?

Here, we can focus our efforts in three ways:

Instead of falling back and waiting for a recovery, this is the time to step forward and help make it happen. We are still a nation that makes more than 50 million hires a year, even in this economy.