For those hoping to rise out of unemployment, two key measures from yesterday’s job openings report give reason for optimism. First, for the second month in a row,  job openings are higher than they were before the pandemic: 8.1 million in March 2021 compared to 7.0 million in February 2020.

Second, a new measure developed by The American Institute for Full Employment finds there were more job openings (8.1 million) than “job seekers”1 (7.7 million) in March. The 0.95 ratio of job seekers per job opening matched March 2017 levels, when unemployment was 4.4%. 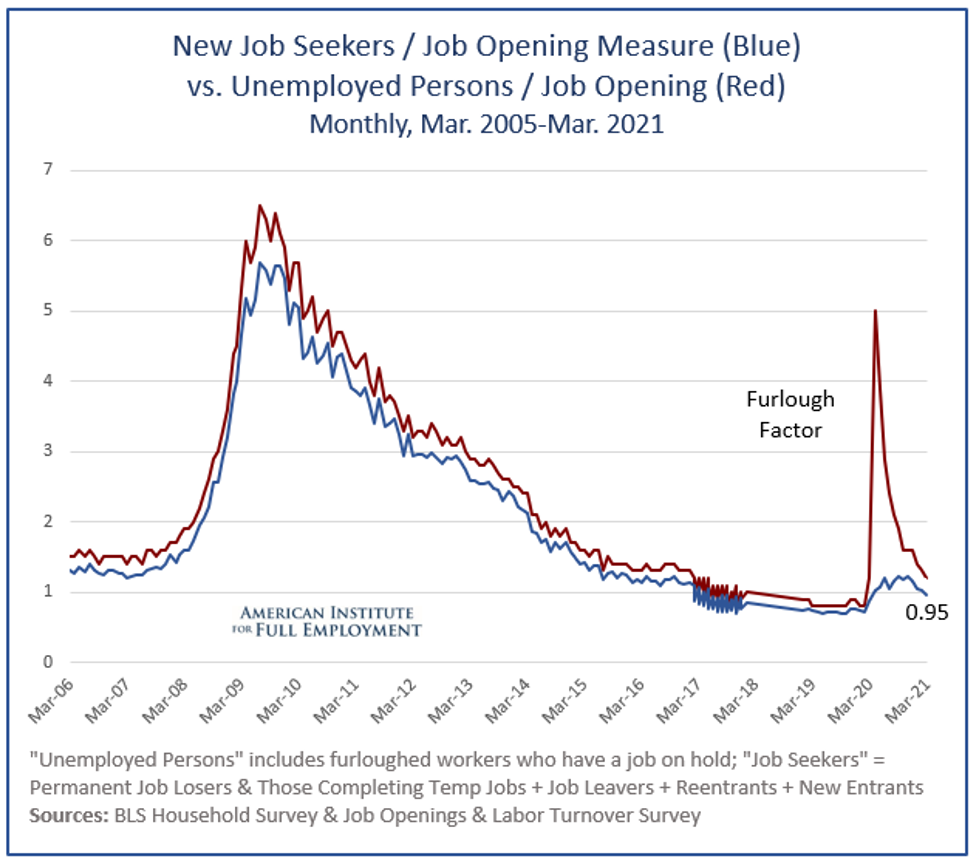 Why are Job Seekers Not Going Back to Work?

With so many job openings, why did Friday’s DOL data show decelerating payroll increases while long-term unemployment continued to nearly quadruple pre-pandemic levels—with 4.3 million workers out of work for over six months? We’ve identified five key reasons why some job seekers aren’t going back to work: 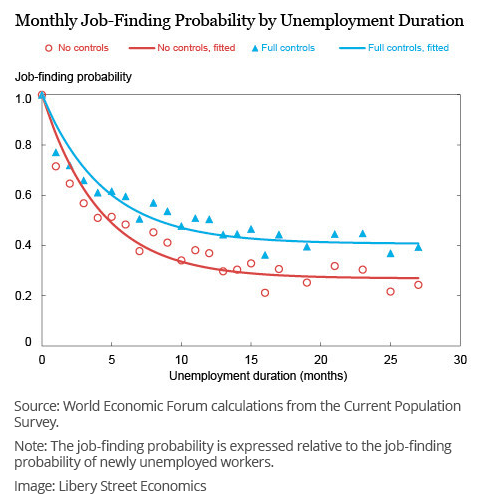 While shutdowns and personal health concerns appear to depend largely on vaccinations, long-term unemployment challenges and incentives to look for work are within the control of Congress and the states.  Just as we have funded unemployment, we should now fund reemployment.

1. Re-engage Workers—End Unnecessary Work Search Waivers. This week, President Biden said: “We’re going to make it clear that anyone who is collecting unemployment who is offered a suitable job must take the job or lose their unemployment benefits . . . .” He noted some limited COVID-related exceptions and asked DOL to help states reinstate work search requirements. Republican House Ways & Means Committee ranking member Kevin Brady has pushed for work search reinstatement for the past year, including the introduction of a recent bill in the House to do just that.

Modernized work search requirements should include activities that not only involve contacting employers but also those that prepare a job seeker to contact the right employer for the right opportunity in the right way. Each of these activities can increase the odds of landing a suitable job faster. Ignoring them tends to prolong unemployment.

While we tend to focus on how UI benefits can replace income for our unemployed, it’s important to keep in mind the other impacts of prolonged unemployment that are harder to address. A worker’s job gap can become costly in terms of keeping skills current, advancing in the workplace and being attractive to employers. On a personal level, unemployment  has been linked in many studies to increases in depression, suicide, alcohol and drug abuse and domestic violence.

2. Double Reemployment Funds in RESEA. To prevent more people from joining the 4.2 million long-term unemployed, Congress should add flexibility and double the budget for states’ Reemployment Services and Eligibility Assessment (RESEA) work —from about $200M a year to $400-$500 million—to enable extra coaching and other assistance. The program is proven to reduce duration of unemployment and produce a positive return on investment.[4] Since the start of the pandemic, the pool of claimants eligible for RESEA services has increased dramatically and many states could provide these cost-effective services if funding were increased. 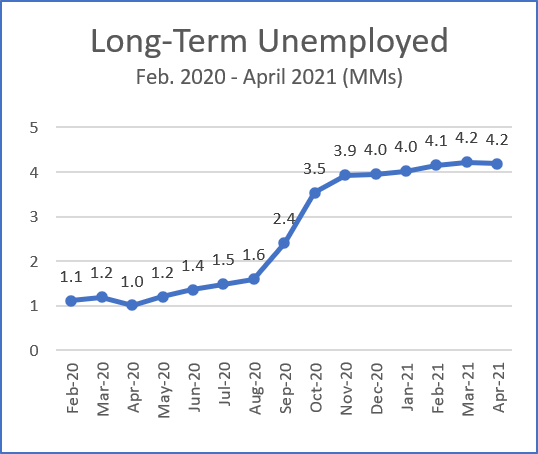 3. Allow On-the-Job Training for the Most Vulnerable. Wage subsidies help employers hire job seekers who are stuck and need a foot in the door to gain the experience and skills necessary to regain their full income. The Georgia Works program and the DOL 2010 Innovation Award-winning Texas Back to Work program offer examples for other states to emulate. A national Georgia Works type program could be enacted giving states the option to allow UI claimants to keep their benefits for eight weeks while they volunteer for an employer willing to provide them needed training and experience so they are likely to land a job at the end of the program.

5. Reevaluate Incentives. As employers struggle to fill openings, some states are trying a new approach: reemployment bonuses. In July 2020, Idaho implemented a $1,500 bonus for employees who return to work for four weeks. Last week, both Montana and South Carolina announced they will end the federal $300 per week supplement and some other federal UI programs at the end of June, and implement a program similar to Idaho’s reemployment bonus approach instead. This week, Governors from a handful of states, including Iowa, Alabama and Tennessee, announced they will follow suit. Finally, last month, a bill was introduced in Congress to provide a similarly-sized reemployment bonus nationally. These return-to-work bonuses can neutralize the perverse disincentives for workers to remain unemployed and for those who return to work more than four weeks sooner, they can cost less than the current program.

We Can Turn the Corner on Long-Term Unemployment

Like much of the nation, state and federal policy-makers are experiencing pandemic fatigue. Those in the trenches of handling the flood and complexities of unemployment claims while fending off fraudsters are especially exhausted. And our unemployed are exhausted—from months suffering the unseen personal poverties of unemployment.

However, this is our time. As we head for the light at the end of the COVID unemployment tunnel, it’s time for policy makers to step up and give one last push, so we don’t leave our fellow workers behind, stuck in a dark place without help or hope. It’s time to commit as much focused effort on reemployment policy as we have on unemployment policy.

John Courtney is President of the American Institute for Full Employment. For the past 25 years, the Institute’s team of consultants has worked with 25 states and Congress to develop evidence-based reemployment solutions in unemployment insurance, welfare and workforce programs. To learn more or apply for a free assessment of your state’s reemployment programs, including RESEA, contact us at info@fullemployment.org.

1Our methodology adapts traditional measures for the pandemic anomalies in the labor market. We define true “job seekers” as excluding furloughed workers – those who are temporarily laid off, have a job to which they expect to return and are not looking for work. In the accompanying chart we compare the traditional U.S. DOL measure of “Unemployed persons per job openings” to our enhanced measure. The traditional measure (red) includes furloughed workers. During normal times, including them had a consistent and small impact on the ratio. However, during the pandemic, including furloughed workers distorts the ratio significantly, undermining its value to job market observers and policy-makers. To provide clarity, AIFE’s alternate measure (blue) eliminates the “Furlough Factor.” Specifically, “job seekers” in our measure includes the following categories from the DOL Household Survey: Permanent Job Losers & Those Completing Temp Jobs, Job Leavers, Reentrants and New Entrants. And while some furloughed workers may be undercounted in current methodology as some are looking for work, some job openings are also undercounted with employers who are willing to make a hire immediately if the right applicant comes along, but who have not met the definition of having actively begun to seek applicants.

We’ve also calculated our new measure using certain pandemic-related labor market drop outs. Some have argued for an expanded definition of the unemployment rate. In February, Federal Reserve Chairman Jerome Powell notably posited that the true unemployment rate was closer to 10% than January’s measured 6.3%. He suggested counting group of workers who dropped out of the labor force and were not looking for work and therefore are not defined as “unemployed.” Powell suggested they should be counted as they “were prevented from looking for work due to the pandemic.” Economists speculate the key drivers for this group are health concerns and the childcare for online students. Encouragingly, the number of these workers has dropped significantly from March to April 2021 (3.7 million to 2.8 million). When including this same group of workers in AIFE’s “job seeker” definition, the ratio of job seekers per job opening rises from 0.95 to 1.4 job seekers per job— matching the ratio in 2016, seven years after the Great Recession.