A handful of states have experimented successfully in reemployment innovations, with promising approaches that emphasize the two most impactful methods of rapid reemployment – motivation and job search skills. Three varied examples of successful strategies have been implemented by Utah, Nevada and Texas over a number of years and the results have been strong.

Utah – The Smart Triage System. Four years ago, in 2012, Utah launched what has become a highly integrated smart triage system of job search engagement and empowerment. The state uses three critical approaches: 1) immediate engagement of all claimants in 100% measurable work search activities which drives initial motivation, 2) immediate connection of claimants to job search skills education through an online portal and 3) a system that provides claimants a graduated series of more intensive reemployment interventions in later weeks of a claim, such as in-person workshops and staff assistance. 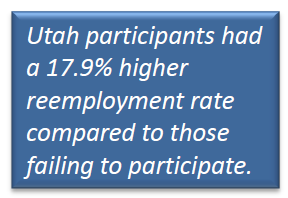 Specifically, Utah’s triage approach engages claimants in an upfront job registration, orientation and skills assessment to determine their need for basic reemployment services. It then guides each claimant to a customized set of requirements as well as resources, such as labor market information on job openings and average wages. To educate claimants, Utah’s system leverages online multimedia job search education modules.

The results have been encouraging. Claimants participating in the online registration have hire rates that are 26% higher than those who do not complete the process.i Claimants who complete their assigned job search skills modules also experience a motivational nudge effect, completing
27.8% more of their modules than required.

Claimants who do not land a job can be chosen to engage in Utah’s Reemployment Support Services program, which requires the claimant to attend an in-person workshop. Participants have a 17.9% higher reemployment rate compared to those failing to participate. Claimants are also chosen to engage in the state’s Reemployment Services and Eligibility Assessment Program which requires a staff-assisted review of the claimant’s recent work search activities and a meeting with a reemployment counselor. This program drove a 10.2% reduction in exhaustion rates for those who participate.

Nevada – In Person Meetings. A 2011 study of a limited Nevada state program found that a one-time meeting with a job coach plus a referral to the right resources reduced unemployment insurance claim duration by nearly three weeks and saving over $800 in benefits.ii 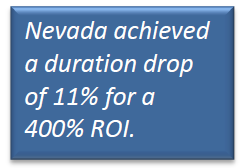 Nevada developed its program under the Reemployment Eligibility Assessment, a federal grant program that operated in a number of states and involved a face-to-face meeting. In 2009, Nevada had a 13.9% unemployment rate when it operated its reemployment eligibility assessment program, which was the best among participating states. Nevada’s process not only included a review of eligibility and a reemployment plan, but encouraged claimants to gain added job search skills through its Job Centers.

After the face-to-face eligibility meeting, the state referred claimants to staff who provided a job match against state and federal automated labor exchange and job referrals, resume assistance, referrals to and participation in training and follow-up with claimants, as needed. Nevada achieved an 11% duration drop and a 400% ROI.

TWC began measuring the number of UI claimants who went back to work in 10 weeks and incentivized Job Center staff to meet the measure. Texas also gave its Job Centers discretion to set a higher number of required weekly employer contacts. 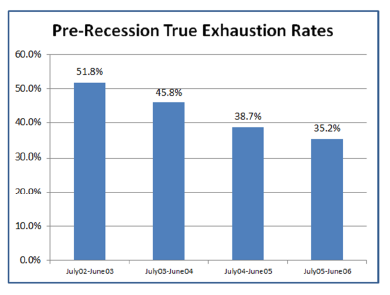 At the same time, TWC decided the US DOL minimum of 480 audits per year wasn’t sufficient and it began auditing 1,500 claimants’ work search activities each week. Every member of the state staff who touched the UI program (about 1,000 people) made a weekly audit call to an
employer. Once it had succeeded in changing the tone of the program, TWC was able to reduce its number of audits.

Finally, the state gained US DOL’s Innovation Award in 2010 by operating the largest UI wage subsidy program in the nation’s history, incentivizing employers to hire claimants who may otherwise exhaust their claims and become long term unemployed.

The Texas changes were not only impactful on the agency’s culture of work but also had a strong effect on claimant outcomes. UI pre-recession claimant exhaustion rates dropped dramatically between July 2002 and June 2006 a 32% improvement.iii During a similar period, using US Department of Labor data, Texas outperformed six peer states, as well as the best five state average, in decreasing its exhaustion rate.iv

Texas measured several financial benefits to calculate the 12 year impact of its reemployment focus. The efforts helped drive an estimate of nearly $1.5 billion in savings to its UI trust fund and helped generate an estimated $1.4 billion in additional wages for claimants, measured by claimant earnings compared to the UI benefits claimants would otherwise have received. Using a conservative 1.55 multiplier, the state’s return to work focus significantly contributed to an estimated $2.2 billion improvement in its economy through claimants’ increased income.v

In recent years, a handful of other states have also developed significant enhancements to their reemployment programs, including, but not limited to Louisiana, Minnesota, Mississippi, Nebraska, Wisconsin and others.

Like many other endeavors, job search outcomes can be improved substantially by focusing on the right motivation and the right skills. As the US anticipates its next recession, states have a narrow window to improve their strategies to help UI claimants return to work more effectively. How is your state preparing?

John Courtney is President of the American Institute for Full Employment, a nonprofit think tank researching, designing,
promoting and consulting with states on the implementation of reemployment best practices. www.fullemployment.org

1 State Innovation: Re-employment Focus in the Unemployment Insurance Program, Michelle Beebe, US House of Representatives, Committee on Ways and Means, Subcommittee on Human Resources, September 7, 2016, Hearing on Challenges and Strengths of Today’s Unemployment Insurance System.
2 Impact of the Reemployment and Eligibility Assessment (REA) Initiative in Nevada, Michaelides, Poe-Yamgata, Benus and Tirumalasetti, Jan. 2012, https://wdr.doleta.gov/research/FullText_Documents/ETAOP_2012_08_REA_Nevada_Follow_up_Report.pdf
3 Texas Workforce Commission Data Request, December 2016. True exhaustion, as measured by TWC, measures the number of claimants who exhausted benefits in a year relative to those who could have exhausted rather than relative to those who received a first payment that year. Texas exhaustion rates subsequently climbed during the recession and then again dropped significantly from 54.8% to 43.6% from 2010 to 2013.
4 American Institute for Full Employment analysis, using US Department of Labor exhaustion data for six states – AL, OK, NM, KS, MO and AR and the best five state exhaustion rate decreases over three years.
5 Estimates are based on the financial impacts had return to work (and thus benefit utilization) remained at the baseline duration levels from before the reemployment initiatives were implemented. Some of the impacts were driven by improved economic conditions.