The six weeks ending May 2nd saw an unprecedented 33 million Americans file for unemployment benefits.i States have been understandably focused on the immediate challenge of processing an avalanche of claims, but as temporary layoffs are beginning to turn permanent, it’s critical to consider strategies for an effective restart to reemployment. 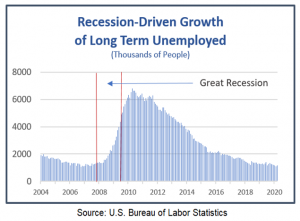 Otherwise, at the end of the summer, we may see a significant number of exhausted UI claimants falling into long-term unemployment.

Here are five ideas to bolster our efforts to contain shutdown-driven unemployment and its many impacts.

1. Immunize Against Misunderstanding. In times of crisis, lack of clear information on critical trends can foster excessive fear and demotivate job seekers already on edge. 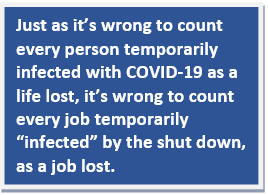 Most of the 33 million new unemployment claimants are experiencing temporary unemployment from a job that’s not lost, but instead on a mandated hold. In a survey in last week’s April report from the U.S. Department of Labor (DOL),  90% of those laid off said their layoff was temporary.iii Similarly, in a recent survey by the Washington Post, 77% of laid-off workers said they expect to be hired back.iv While a “33 million jobs lost!” headline is attention-grabbing, it creates misunderstanding and unnecessary and harmful fear for those with permanent layoffs who are struggling to maintain hope. 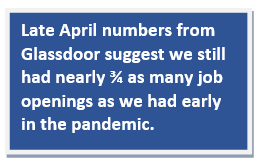 Publicize Job Openings & Hires. The actual data on job openings is much more hopeful and suggests many employers are still hiring.

This week, Glassdoor, one of the world’s largest jobs sites, released its April 27th data on job openings. It showed a 28% drop from the beginning of March.v In other words, compared to the beginning of the pandemic, it appears we still had nearly three-quarters as many job openings. Meanwhile, Glassdoor data also suggests that the rate of job openings decline has slowed significantly in recent weeks.

If the broader U.S. job market correlates with Glassdoor’s data, there were more than 4.5 million open jobs last week – roughly as many as we had in the spring of 2014. In the face of the crisis, that’s pretty encouraging.

Hiring data is also highly relevant to those hoping to be hired. Even in 2009, the worst year of the Great Recession for hiring, U.S. employers averaged nearly four million hires per month.

By sharing this clearer picture of actual job losses and monthly hires with job seekers, we can help them maintain a more accurate outlook and greater optimism.

2. Restructure Incentives & Make Them Clear. Job seeker proactivity is also influenced by incentives to pursue work. A number of states have waived work search requirements, even for claimants permanently laid-off. In addition, through funding from the federal Coronavirus Aid, Relief and Economic Security (CARES) Act, states are paying claimants an extra $600 in benefits per week for four months (through the end of July) in Federal Pandemic Unemployment Compensation (FPUC) and are providing a safety net of 13 weeks of Pandemic Emergency Unemployment Compensation (PEUC) for claimants who exhaust their regular state benefit. While Congress faced time and systems constraints when crafting emergency reinforcements to our nation’s unemployment safety net, it’s time to consider readjusting the net to better balance incentives for reemployment.

Adjust the $600 FPUC Add On. Depending on how they’re structured, safety nets can be sticky and difficult to climb out of. Studies have long shown increases in benefits can naturally increase the duration of unemployment. 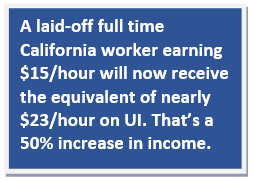 Adding $600 to every UI benefit check can have a startling impact. For example, a laid-off full-time worker earning $15 per hour would normally receive the equivalent of $7.50 per hour through UI.vi With the $600 add on, that same worker will now receive the equivalent of nearly $23 per hour for four months. That’s a 50% increase in income while out of work. The $600 should be reevaluated in the next stimulus bill.

Emphasize the Availability Standard. For temporarily laid-off workers, it will be important for states and DOL to continue emphasizing the requirement to be “able and available” to work and to return to their former employer when called back to work.

Not surprisingly, some employers are reporting that the $600 weekly FPUC payment, when combined with regular UI payments, has led workers to refuse to return to their former jobs. At the same time, in at least one state, essential employers report not being able to hire enough employees – perhaps because they are competing with a combination of high unemployment compensation and the work search waiver.

In its UI program letters, DOL is combatting the disincentive effect. Some states are too. Last week, Ohio’s agency told employers: “If you have employees who refuse to return to work or quit work, it’s important that you let the Ohio Department of Job and Family Services (ODJFS) know so we can make accurate eligibility determinations.” 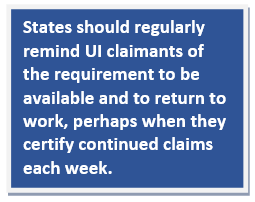 More states should proactively clear the cloud of COVID-related UI confusion. Beyond informing employers, they should regularly remind claimants of the requirement to be available and to return to work, perhaps when they certify continued claims each week. Reasonable exceptions should be made for those with health issues.

Normalize Work Search Waivers. While waivers are appropriate for those likely to make a timely return to their previous job after layoff, they send the wrong message and can be harmful to the millions of permanently laid-off UI claimants. Rather than backing off work search activities, it’s more important than ever for these workers to be diligent in their job search. States should reserve waivers – as they normally do – for those expected to return to work.

Prepare for Those Who Exhaust – Lessons from the Great Recession. In the last recession, claimants who exhausted their current UI benefits and sought extensions were required to show up for an in-person meeting. Surprisingly, despite thousands of dollars in UI benefits at stake, a large number of claimants failed to show up,viii for one of a handful of suspected reasons – none of them positive. Many were undoubtedly depressed, ashamed to meet with staff, not looking for work, already employed or unaware of the need to show up. Regardless of the reason, the low show-rates suggest a lack of engagement, hope and integrity in our UI and reemployment systems.

This time, we can do better, and a growing number of states are using two new approaches to increase show rates: optimized communication and virtual meetings.

In 2015, Michigan tested how communication could boost claimant completion rates for mandatory in-person Reemployment and Eligibility Assessment (REA) meetings.ix With simple email notifications leading up to the scheduled meeting time, the state boosted its program completion rate from 42.9% to 56.7%. Other states have implemented a self-scheduling function for RESEA meetings. That requires a technology investment, but can also strongly improve show rates.

Other states have sought better engagement and tested virtual RESEA meetings, finding that when given the option, claimants have a strong preference for virtual meetings instead of in-person meetings.

3. Diagnose Permanent Unemployment. Just as designing effective responses to COVID-19 requires knowing who’s been infected, it’s critical to know when temporarily laid-off job seekers become permanently laid off. In normal times, temporarily laid-off job seekers are a minority of claimants and most return to work roughly as expected. Today’s environment is different: Most claimants are on a temporary layoff and employers are often uncertain if their layoffs will become permanent.

To render a more timely and accurate diagnosis of layoff status, a pop-up message or required question in a claimant’s weekly certification of continued eligibility could ask: “Have you been notified that your layoff is permanent?” Those answering “yes” could then be directed to a path for reemployment. Just as we’ve prioritized health care for those with serious health issues, we should prioritize reemployment care for those with serious unemployment issues, sooner rather than later. 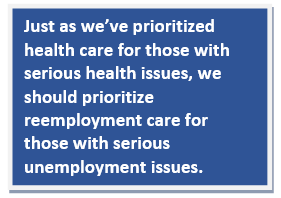 4. Triage Claimants. To best engage the enormous volume of claimants, states should borrow another concept from the medical field by triaging claimants to save the more intensive care systems (RESEA, workforce programs, etc.) for those with the greatest need, while letting those who can recover without intensive help do so.

Modernize Work Search Activities. Especially in this market, simply asking claimants to contact employers is not enough. First, claimants are unprepared to find the right job openings, make quality contacts with employers and turn them into job offers according to one study where claimants rated their job search skills at a D+ average. Second, experts suggest that an effective job search entails a variety of activities, from career direction decisioning to resume writing to interview preparation.

To foster rapid reemployment, states should engage claimants each week in a variety of countable job search activities informed by studies showing increased job-seeker motivation and job search skills can boost the chances of landing a job by over 60%x. Fortunately, for workers conducting a job search in the current COVID environment, most job search activities are done at a distance. These include a wide array of activities such as online job board searches, skill assessments, online networking, job search skill development and use of tools, such as LinkedIn activities, which LinkedIn can now certify for UI claimants.

Even activities that are often in-person – such as workshops. RESEA meetings, networking, applying and interviewing – can all be accomplished effectively at a distance in today’s job market.

Modernize Work Search Rules. Allowing and encouraging a variety of effective job search activities will require more thought in some states than others. Many states have not modernized their list of countable work search activities and continue a disproportionate emphasis on asking claimants to simply contact employers.

These states should consider immediately updating their UI work search rules along the lines of DOL’s model policy guidance in its February 2020 Training and Employment Notice No.17-19.xi Example guidelines include:

5. Prepare the Intensive Care Structure: On the Job Training. Finally, we must be ready to give intensive care to those job-seekers struggling the most – those headed for long-term unemployment. 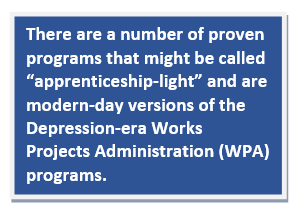 There are many proven programs that might be called “apprenticeship-light.” These modern-day versions of the Depression-era Works Projects Administration (WPA) program include variations such as wage subsidies, hiring incentives, funding on-the-job training and work experience programs. Properly designed, these programs not only help workers remake themselves in new occupations, they act as smart stimulus strategies that help employers hire and mentor those who need a chance.

Like ventilators and beds, our nation has a limited supply of this more intensive treatment. Fortunately, it’s within our power to increase that supply. With the right support of Congress, DOL and states, they can be activated in short order. Examples include:

Giving states federal funds or the flexibility to use state UI funds for such programs will not only help more UI claimants return to work, it can pay for itself through UI trust fund savings.

The next several months will not only begin to reveal the ultimate economic impact of COVID-19, they will also serve as the window of opportunity to stave off long-term unemployment for many of our nation’s permanently laid-off employees. The time is now to sharpen policy and programs to promote reemployment and recovery.

John Courtney is President of the American Institute for Full Employment, whose team of consultants has worked with more than 25 states and Congress to develop evidence-based reemployment solutions in unemployment insurance, welfare and workforce programs for the past 25 years. For help assessing your state’s reemployment or evidence-based RESEA program, contact the Institute at info@fullemployment.org or visit fullemployment.org.