Texas has long distinguished itself among states by focusing its unemployment insurance (UI) program on reemployment. Well before the Great Recession of 2007-2009, through the driven leadership of veteran workforce visionary Larry Temple and his team, the Texas Workforce Commission (TWC) began introducing nine landmark strategies to improve UI claimant reemployment:

Texas believed that if it engaged local Boards, employers and job seekers, integrated its operations and activities, added meaningful measures and incentivized employers to hire struggling job seekers, it could impact the reemployment of claimants.

Over the following decade and a half, these reemployment innovations in Texas not only helped UI claimants back to work faster, it’s estimated that they also drove more than $1.5 billion in additional wages for those claimants while saving the state an estimated $1.7 billion.

As the Reemployment Services and Eligibility Assessment Program (RESEA) expands more than six-fold in the coming years, and the country braces for the inevitable next recession, the Texas journey provides important insights for states modernizing their work search and reemployment strategies.

The Texas Workforce Commission (TWC) operates the state’s UI program and oversees Workforce Development programs. Its previous leader, Larry Temple, joined the agency in 1997 and launched a series of initiatives focused on reemploying those who had lost their jobs and needed help. Those initiatives are profiled in this paper.

1.  The Texas 10-Week Measure
In 2003, TWC created its own UI reemployment measure and overcame the pitfalls of two primary federal measures – duration and exhaustion. Duration measures weeks claimed and is a proxy for the amount of time it takes for a claimant to land a job. Exhaustion measures how many claimants claim all of their benefits without landing a job.

The federal duration and exhaustion measures are also difficult to compare between states because states vary in the number of weeks claimants are eligible. By using a measure of 10 weeks, TWC eliminated most of that variability because nearly all claimants are eligible for 10 or more weeks.

By doing so, Texas created an important new kind of “exhaustion” measure at 10 weeks that provided a sharper focus on rapid reemployment. 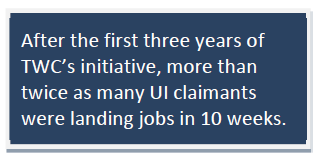 When the program started, only 28.5% of claimants were back to work within 10 weeks. Results steadily improved over the next three years to more than double that number:

The program is still in place and, in the first half of 2019, the average has been roughly 60%.

2.  Local Incentives
TWC not only designed the 10-week measure as its benchmark, it also added language to its arrangements with local boards to incentivize them to achieve a faster pace of reemployment. At its annual conference, TWC recognized local boards who excelled in their performance. The incentives and recognition reinforced the importance of performance with the local boards.

3.  Employment Services Integration with One Stops
In the summer of 2003, TWC gave its Local Workforce Development Boards operational responsibility for day to day management of its Wagner-Peyser-paid Employment Services staff to help ensure a more coordinated, integrated service delivery model in local one stops. The focus was to make the job seeker experience more seamless, to avoid duplication of efforts and to ensure services and messaging was consistent for customers.

4.  Employer Engagement & Penetration Measure
At the same time TWC began measuring how many claimants went back to work within 10 weeks, it also starting measuring its “employer penetration” – the number of Texas employers using some form of TWC workforce services (mostly placing job orders).

In 2003, before the initiative began, the state served approximately 30,000 employers. Over the next 15 years, TWC’s employer penetration more than tripled:

5.  WorkinTexas System
In May 2004, TWC enhanced its systems by launching WorkInTexas.com (WIT), which included reemployment features to serve claimants, including a job board. The new WIT system facilitated sending claimants regular matches of suitable job openings and became an integral part of TWC’s resources.

6.  Work Search Requirements – Job Center Flexibility
In 2005, TWC made its work search contacts rule more concrete, requiring all claimants to make a minimum of three employer contacts per week. To recognize local ability to discern job seeker needs, TWC also gave its local boards flexibility to set a higher requirement for employer contacts, depending on the job seeker and the local job market.

7.  Integrated Employment Service Registration with UI
In the summer of 2005 TWC decided that to facilitate earlier engagement in work search it would create an auto-registration step that would use data from the UI system to register the claimant in its WorkInTexas.com labor exchange system (or to reactivate the account if one already existed.  This also made the local Boards aware of new claimants earlier so they could begin working with them. This also allowed the WIT system to “push” job postings to each claimant on a regular basis, based on the claimant’s profile. 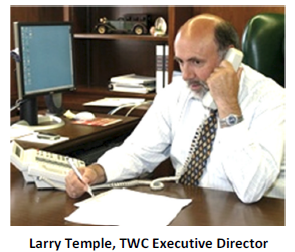 8.  Program Integrity – Agency Brand & Culture
TWC determined the US DOL-required number of work search audits was far too low, and began auditing more than 150 times as many as required.

TWC staff audited approximately 1,500 claimants’ work search activities each week compared to DOL’s annual requirement of 480. To foster an agency culture that emphasized integrity, TWC directed every member of the state staff who touched the UI program (over 1,000 people) to make at least one weekly audit call to an employer.

Once TWC succeeded in ensuring that the tone of the program — both internally with staff and externally with claimants and employers – was one of integrity and reemployment, TWC was able to reduce the number of audits conducted each week.

9.  Texas Back to Work
As the country was suffering from the high unemployment impacts of the Great Recession of 2007-2009, many employers faced the dilemma of whether they could afford to hire and train new employees. At the same time, a loss of job skills and growing lengths of unemployment made it increasingly difficult for claimants to find employers willing to train them to acquire new skills.

As state UI and workforce development programs wrestled with how to create opportunities for UI claimants to return to work more quickly, Texas developed a wage subsidy model to provide cash incentives to employers to hire and train UI claimants. The Texas Back to Work program drove such great results that it earned TWC the Obama Administration US Department of Labor’s 2010 Innovation Award.

TWC launched a pilot of the program in February 2010 and then expanded it statewide. The program targeted UI claimants who had earned $15 per hour or less and needed training to develop new skills. Employers that hired participating claimants for 30 hours per week were eligible for a $2,000 incentive, normally paid in four equal monthly installments of $500, over 16 weeks, while the individual was employed.

The Texas Back to Work program sought to help struggling UI claimants job get a foot in the door with an employer who otherwise wouldn’t have hired them and to get the training and baseline experience they needed. The resulting increased speed of reemployment saved claimants weeks of unemployment and saved Texas weeks of UI benefits paid. 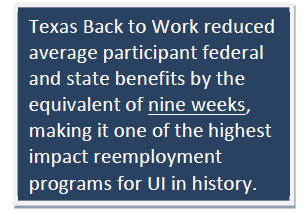 Results. As of September 2012, in less than three years since it started, over 5,000 employers had participated and over 30,000 UI claimants had landed new jobs. It served large and small businesses alike. More than two-thirds of the employers who participated had 100 or fewer employees and success rates were high. In the quarter following completion of their experience:

Administrative Costs. Compared to other wage subsidy programs, TWC’s administrative costs were cost effective: approximately $100 per placement for each claimant completing the program.

Funding. Program funding came from several sources, including $15 million from the state’s general revenue and $20 million from federal sources such as stimulus dollars.

Savings Achieved.  Using regression analysis while controlling for demographic and economic factors, TWC found that Texas Back to Work reduced average participant federal and state benefits by the equivalent of nine weeks. When comparing benefits claimed by participants to similar nonparticipants, TWC calculated that Back to Work saved $596 per participant, even after paying for administration of the program and the $2,000 employer incentive.1

Wage Replacement Rate.  While the vast majority of participants had been unemployed long enough to be required to accept 75% of their previous wages to remain eligible for UI benefits, the average wage replacement for a Texas Back to Work claimant was a surprising 96.8%.

TWC operated the what is believed to be the largest state-run UI wage subsidy program in the nation’s history, incentivizing employers to hire claimants who may otherwise exhaust their claims and become long term unemployed.

Shortly after its implementation in Texas, the Back to Work Program was replicated in Utah. It was also replicated in Nevada as Silver State Works, where it continues to operate.2

Overall Texas Results
TWC’s initiatives were not only impactful on the agency’s culture of work but also had a strong effect on claimant outcomes. 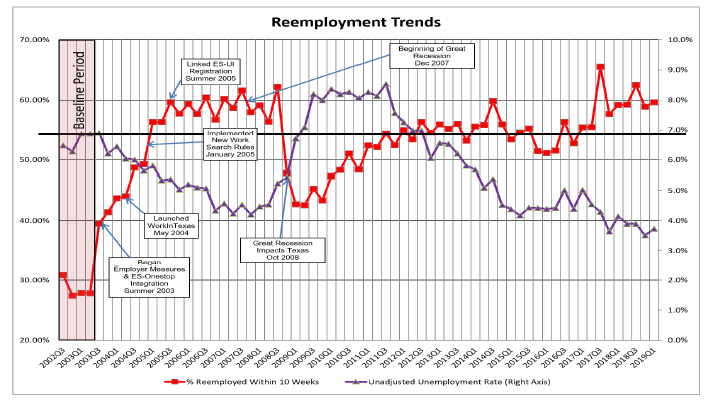 The chart above shows UI claimants reemployed at 10 weeks increasing nearly 85% on a relative basis in the first two years of the measure, despite an unemployment rate remaining over 5%. 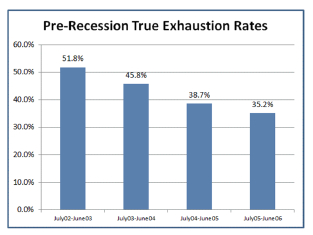 UI pre-recession claimant exhaustion rates also performed well, dropping by a dramatic 32 percent between July 2002 and June 2006.3 During a similar period, using US DOL data, Texas outperformed six peer states, as well as the average of the nation’s best five states, in decreasing its exhaustion rate.4

The reemployment impacts had a strong effect on the economy as well. Several years ago, when TWC analyzed 14 years of data, it estimated that the state’s focus on reemployment helped drive nearly $1.7 billion in savings to its UI trust fund and helped generate an estimated $1.5 billion in additional wages for claimants (measured by claimant earnings compared to the UI benefits claimants would have otherwise received). Using a conservative 1.55 multiplier, the state estimated its return to work focus contributed $2.36 billion to its economy through claimants’ increased income.5

Conclusion
Through the tireless and focused efforts of Larry Temple and his team at the Texas Workforce Commission, the agency was able to leverage nine leading strategies to realize its mission to make a difference for its job seekers by strongly improving UI claimant reemployment. In doing so, TWC added back billions to the Texas economy, while helping millions of claimants on their journey back to work and inspiring states across the US to follow its lead.

American Institute for Full Employment Work
Our team consists of former state agency executives who have been in workforce, unemployment and welfare programs for decades. We have worked on policy design and implementation in more than 25 states, from Utah to South Carolina and from Texas to Wisconsin. The Institute conducts leading research, studies best practices, and develops practical solutions in the areas of unemployment insurance, workforce development, retirement income, and public assistance. The Institute assists states with policy and program design and implementation.

The Institute also publishes opportunity reports that provide a vital source of information for state and local officials who want to know how their workforce and public assistance programs compare to those in other areas and what they can do to improve. The Institute was founded in 1994 and is based in Southern Oregon.

1 By controlling administrative costs at $100, the potential placement cost of a claimant with an employer is $2,100.  However, due to not all placements lasting 16 weeks, the average placement cost was $1,700.
2 More information on Nevada’s Silver State Works program can be found here: http://www.silverstateworks.com/.
3 Texas Workforce Commission Data Request, December 2016. True exhaustion, as measured by TWC, measures the number of claimants who exhausted benefits in a year relative to those who could have exhausted rather than relative to those who received a first payment that year. Texas exhaustion rates subsequently climbed during the recession and then again dropped significantly from 54.8% to 43.6% from 2010 to 2013.
4 American Institute for Full Employment analysis, using US Department of Labor exhaustion data for six states – AL, OK, NM, KS, MO and AR and the best five state exhaustion rate decreases over three years.
5 TWC Estimates are based on the financial impacts had return to work (and thus benefit utilization) remained at the baseline duration levels from before the reemployment initiatives were implemented. Some of the impacts were driven by improved economic conditions.