Unemployment in July held steady at 4.3%—the lowest rate in over 10 years—and 5.7 million jobs remained open and unfilled.1 However, more than seven million workers remained unemployed, and more than a quarter of them had been out of work for six months or more. One cause is the difficulty job seekers often have in translating their skills from prior occupations to new ones in our ever-changing employment market. They’re often caught in the experience catch-22—how do you land a job that requires experience when you have none? 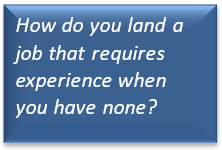 Fortunately, work-based training is a proven solution that comes in several varieties. The most intensive version is apprenticeships, which gained recent attention when the administration proposed adding five million of them. Apprenticeships typically use intensive on-the-job and classroom training, typically over one to three years, and prepare workers for careers as electricians, finish carpenters and other roles that require highly technical skills.

Shorter work-based training programs can range from two to twelve months and have also been proven to increase skills and employment in an even wider variety of settings. They include several state innovations, as well as several federal programs, such as the Workforce Innovation and Opportunity Act On-the-Job Training program and the Work Opportunity Tax Credit. Two of the most successful types of such programs – based on job seeker outcomes and return on investment – are volunteerism and wage subsidies.

Voluntary work has been recognized by the federal government as one of the best strategies for landing a new job, improving the chances of being hired by 27%.2 It gives job seekers needed experience, a foot in the door and a new network. Unfortunately, while the federal government has encouraged volunteerism in the nonprofit and government sectors, DOL regulations essentially outlaw it for over two thirds of all jobs by blocking it for regular for-profit employers.3

Georgia implemented a work-based training program for its unemployment claimants called Georgia Works, which was replicated in a handful of states including New Hampshire, Missouri and North Carolina. The program allowed UI claimants to keep their benefit checks while they volunteer with an employer to receive training for up to eight weeks. The program arranged workers compensation coverage through the state for participants and paid a one-time stipend of $240 to participants to cover incidental costs.

Through January of 2010, over 10,000 job seekers had participated, with 6,105 completing training and 3,363 landing jobs through the program. Another 1,170 job seekers landed jobs in the quarter after completing their training—a common benefit seen in similar programs.

Disappointingly, the expansion of Georgia Works into other states was chilled when the US Department of Labor issued regulations interpreting federal law to require that volunteers with for-profit employers—the primary participants in the Georgia Works program—fit a narrow “trainee” exception which essentially requires the employer to train an unqualified worker without any net benefit to the employer.

Oregon JOBS Plus. For more than a decade, starting in the early 1990s, Oregon operated the first large-scale UI-specific wage subsidy program, which helped over 10,000 claimants and created new jobs.  Oregon’s program showed clear evidence of not only improved employment results, but also a wage gain compared to similar nonparticipants. The program, which offered employers a $5 hourly wage subsidy and targeted claimants who had earned $15 or less in their prior job, had the following outcomes:

Texas Back to Work. Texas launched its hiring incentive program in February of 2010. The program targeted claimants who had earned $15 per hour or less and employers who hired these UI claimants for at least 16 weeks are eligible for a $2,000 incentive paid in equal $500 monthly installments as long as the individual remained employed.

As of September 2012, more than 5,000 employers had participated and more than two-thirds of those employers had 100 or fewer employees. At that time, the program had served over 30,000 UI claimants and 83.8% secured employment upon completion of their training period.

Wage Replacement Rate.   While the vast majority of participants had been unemployed long enough that they would normally be required to accept 75% of their pre-wages to remain eligible for UI benefits, the average wage replacement for program claimants was 96.8% of their previous wage.8

Reduction in Benefit Costs Due to Reemployment.   Using regression analysis while controlling for demographic and economic factors, Texas found that program participants reduced benefits received by 9 weeks on the average (between state and additional federal benefits available at that time).

Due to its success, the Texas program won DOL’s Innovation Award and was later replicated in Utah and Nevada. 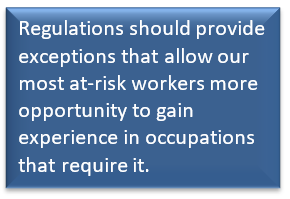 As we look back at the past eight years since the end of the Great Recession and consider the 32 million unemployment insurance claimants who exhausted their claims without landing a job, perhaps it’s time to rethink regulations that exist to protect workers but instead can block their access to proven reemployment programs.

Modernized, compassionate regulations should provide exceptions that allow our most at-risk workers more opportunity to gain experience in occupations that require it.  For example, what if:

Before long, another recession will undoubtedly drive higher rates of long-term unemployment.  Now may be just the time to ease regulations that close doors on our long-term unemployed and instead let our promising experiments flourish.

In the midst of our economic recovery, we owe more to the job seekers who’ve been left behind – those who have ample skills but who find themselves trapped in the experience catch-22.

John Courtney is President of the American Institute for Full Employment, a nonprofit organization researching, designing, promoting and consulting with states on the implementation of reemployment best practices.  www.fullemployment.org