Why Piddle Around? Jobs and Economic Development

The economy slows and states scramble for a response. State economic development gurus scour state budgets, asking: “Where do we find money to create jobs?” Meanwhile unemployment and welfare leaders dole cash to claimants asking: “How long must we wait for jobs.” The opportunity to turn cash support into jobs and economic development is ripe. Sound familiar?

A Lesson from the Depression – How not to do it

In 1935, with unemployment at 18%, President Roosevelt decided to fund jobs, not unemployment and he created the Works Progress Administration (WPA). The WPA used government money for government jobs and was warmly received at first. But when it became apparent that many of the supposed jobs were merely “make work”, the WPA lost favor and became rhetorically known as We Piddle Around. 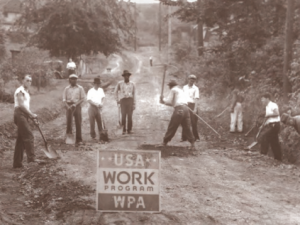 Roosevelt reemphasized the project nature of the program, renaming it the Works Projects Administration and over eight years, the WPA built thousands of schools, bridges and other public projects. More importantly, 8.5 million people worked and reaped the financial and psychological benefits of work.

Unfortunately, the WPA was expensive and, according to many economists had little economic development effect on the national economy, which eventually climbed out of the Great Depression with monetary stimulus and the consequent private sector spending.

The lessons are simple: 1) real work works and “make work” doesn’t, 2) private works not public works stimulate the economy and 3) costs must be controlled.

The modern-day scaled-down cousins of the WPA are subsidized wage programs. They come in a variety of forms, but are widely underutilized in most states.

Subsidized wage programs take the money states spend on the unemployed (cash benefits or classroom training) and offer it to employers who agree to provide job seekers with a job, training and a regular wage. The subsidy normally funds about half of the employer’s wage cost for three to six months,
providing an incentive and ensuring a partnership.

Wage subsidies have evolved to answer the criticisms of the Roosevelt era program. They: 1) create real work with employers who will not hire an employee for “make work;” 2) promote economic development by fostering job creation and immediately increasing production; and 3) contain costs by simply converting previously committed money.

One State’s subsidized wage program involved over 10,000 employers. When surveyed by the state, over 96% that used the program were in favor of the program and over 80% said it helped their business by: 1) lowering costs; 2) increasing their capacity; and/or 3) supporting expansion.

The State invested over $25 million normally used to subsidize unemployment but diverted to subsidize jobs. Thus funds were injected back into the economy in the form of production. Wages paid in the economy were twice the amount of benefit checks, and the unemployed became producers in the economy, tapping the multiplier effect and adding to the tax base.

Compare this to other economic development programs, for example, tax credits that lure jobs from one community to another – arguably a zero sum game. And consider the cost/savings for an average state:

With so many cost-free ways to create jobs and economic development, one question remains: