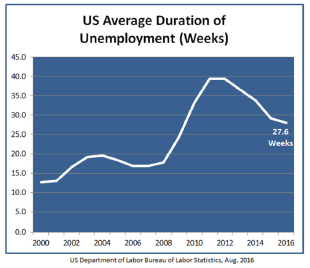 Despite over five million open jobs, the average job seeker remains unemployed more than six monthsi and over one third of unemployment insurance claimants are still exhausting all of their benefits, often at six months, without landing a job.ii This is costly for employers and job seekers alike. The average claim against an employer’s unemployment account from a laid off employee is over $5,000iii, and in recent years, the poverty rate nearly tripled for jobseeking parents who’ve been without work six months or longer.iv One reason for such a high duration of unemployment may be that many jobless workers rate their job search skills at a D+ or worse.v

Fortunately, research reveals proven and measurable ways job seekers can return to work faster and suggests that a focus on motivation and job search skills can strongly increase reemployment results.

A 2014 review of 47 studies on how to help job seekers find work found “the odds of obtaining employment were 2.67 times higher for job seekers participating in job search interventions compared to job seekers in the control group.”vi

The study identified promoting proactivity as the most effective intervention. Examples of proactivity include jobs seekers considering positions that differ from their former work and contacting employers for jobs or referrals.

The second most impactful strategy was goal-setting, such as setting a target for weekly job search activities and meeting regularly with a job coach to review progress and plans. Third was enlisting social support, e.g. when peers, family and friends provide emotional support, give job leads, review resumes or offer help with babysitting.

Fourth was improving job search skills such as networking and resume writing and the fifth was improving self-presentation—for example, learning how to dress and speak appropriately in an interview.

Overall, these top methods can be grouped into two broad types of job search assistance: motivation (proactivity, goal setting and social support) and job search skills (including the skill of self-presentation). Notably, job search help that included only motivation or only job search skill development had no significant impact, but including both had strong impacts.

Implications for UI Work Search Requirements. Applying the research findings to UI programs suggests that work search requirements should include job search skill development as well as activities and messaging that are motivating to claimants.vi

Notably, job search help that included only motivation or only job search skill development had no significant impact. Including both had strong impacts.

1. Motivation. State efforts to motivate UI claimant work search activity can be in the form of a “stick” or a “carrot” approach and can range from punitive to impotent depending on design.

The Stick Approach. Historically, states have used a “stick” form of motivation—requiring claimants to complete certain activities or face suspension of their claim. Typically, these states require claimants to make two employer contacts per week and rely on federal standards for enforcement. This approach has suffered from three design flaws.

Successful states have begun to leverage alternative work search requirements that are both meaningful and trackable, such as face-to-face counseling and online education. When claimants fail to comply, these states suspend benefits until a claimant completes the requirement. States that avoid being punitive do not reduce total claim eligibility for claimant noncompliance. Instead, they allow the claimant to complete their requirements and retain their initial eligibility for benefits, tacking on a missed benefit week to the end of the claimants’ total benefit weeks.

The Carrot Approach & The “Nudge.” A number of states have also tested several “carrot” approaches to motivate UI claimant success. One example is paying a cash bonus to those who land a job faster. Tests show that bonuses do improve reemployment speed, but only marginally.vii Another carrot approach currently being tested in several states, including Utah and Kansas, is often called “nudging.” Nudging relies on behavioral science theories and seeks to convince claimants of the value of engaging in an active job search.

An example of nudging is educating claimants about how much higher their weekly income will be when they land a job, compared to their weekly UI benefits. Another example is requiring claimants to craft their own job search plans combined with some education on the most successful activities. Ideally claimants will then “take ownership” of completing productive activities, rather than resist what they’re otherwise forced to do weekly.

The results of such recent nudge trials are not yet available, but other experiments suggest they will prove productive. For example, in three separate but similar trials of statistically significant samples, UI programs in Utah, Indiana and Mississippi found that a requirement to complete four online modules in a larger job search education system acted as a nudge for claimants to pursue more job search education than required. Once exposed to a collection of job search advice, claimants voluntarily decided to complete over one third more job search skill education than required.viii In short, by educating claimants, states nudged those claimants to pursue additional much-needed education in job search skills.

2. Job Search Skills. The job search skills gap is significant. In three state studies, UI claimants chosen at various stages of claim duration rated their skills at a D+ average. How can this be? Because job search skills training is rarely a formal component of high school or college curricula, job seekers rely primarily on college and government career centers and self-study options. The majority of workers have little training in job search skills, other than occasional trial and error experience during job changes. The resulting job search skill gap not only impacts unemployment rates, but also impacts the ability of workers to identify their transferable skills and bring them to the attention of employers—and an employer’s perception of a skill gap, whether accurate or not,
is reality.

Fortunately, in each of the three states where job search skills were studied, the same claimants who initially rated their skills at a D+ said their skills improved by over 30% to a B+, through self-directed online training, including resume writing, networking and interviewing skills.ix

With careful program design that emphasizes motivation and job search skills, state UI programs can play a truly meaningful role in improving UI claimant reemployment. As the US prepares for its next recession—whenever that may be—the question must be asked: Are states equipped to help the next large wave of UI claimants land new jobs?

The author, John Courtney, is the President of the American Institute for Full Employment, a nonprofit organization researching, designing, promoting and consulting with states on reemployment best practices. www.fullemployment.org